Together, we enable and empower individuals with disabilities to work and live independently by providing individualized services to consumers and employers.

Due to the COVID-19 pandemic, DRS was unable to hold its annual Ability Works Recognition Ceremony in 2020.

However, it is extremely important to acknowledge individuals with disabilities for their employment success and contributions during these difficult circumstances.

Therefore, DRS implemented a nontraditional awards program, the Unsung Heroes of 2020, to recognize DRS consumers who were employed in a "frontline" employment situation during the pandemic.

Nominated and recognized DRS consumers were employed during the pandemic in a capacity that involved serving others by providing essential services to help maintain public health and safety and/or economic stability during these unprecedented times.

With this campaign, DRS celebrates these workers for their contributions and expresses gratitude for their extraordinary dedication and spirit. These hard-working individuals are the true heroes of this time. 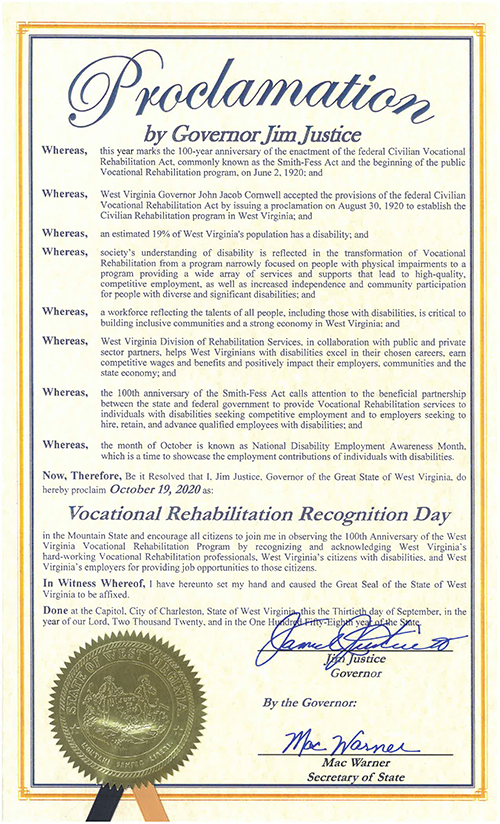 With October being National Disability Employment Awareness Month, this is a time to celebrate the role the Vocational Rehabilitation program plays in helping people with disabilities to break down barriers to employment, as well as a time to applaud the success of workers with disabilities for their determination, innovation and hard work and to acknowledge employers for promoting diversity in the workplace by having inclusive hiring practices.

The full text of the proclamation follows.

Whereas, an estimated 19% of West Virginia's population has a disability; and

Whereas, society's understanding of disability is reflected in the transformation of Vocational Rehabilitation from a program narrowly focused on people with physical impairments to a program providing a wide array of services and supports that lead to high-quality, competitive employment, as well as increased independence and community participation for people with diverse and significant disabilities; and

Whereas, a workforce reflecting the talents of all people, including those with disabilities, is critical to building inclusive communities and a strong economy in West Virginia; and

Whereas, West Virginia Division of Rehabilitation Services, in collaboration with public and private sector partners, helps West Virginians with disabilities excel in their chosen careers, earn competitive wages and benefits and positively impact their employers, communities and the state economy; and

Whereas, the 100th anniversary of the Smith-Fess Act calls attention to the beneficial partnership between the state and federal government to provide Vocational Rehabilitation services to individuals with disabilities seeking competitive employment and to employers seeking to hire, retain, and advance qualified employees with disabilities; and

Whereas, the month of October is known as National Disability Employment Awareness Month, which is a time to showcase the employment contributions of individuals with disabilities.

Now, therefore, be it resolved that I, Jim Justice, Governor of the Great State of West Virginia, do hereby proclaim October 19, 2020, as:

In witness whereof, I have hereunto set my hand and caused the Great Seal of the State of West Virginia to be affixed.

Done at the Capitol, city of Charleston, State of West Virginia, this Thirtieth day of September, in the year of our Lord, Two Thousand Twenty, in the One Hundred and Fifty-Eighth year of the State.

The Proclamation is signed by Governor Jim Justice and Secretary of State Mac Warner. 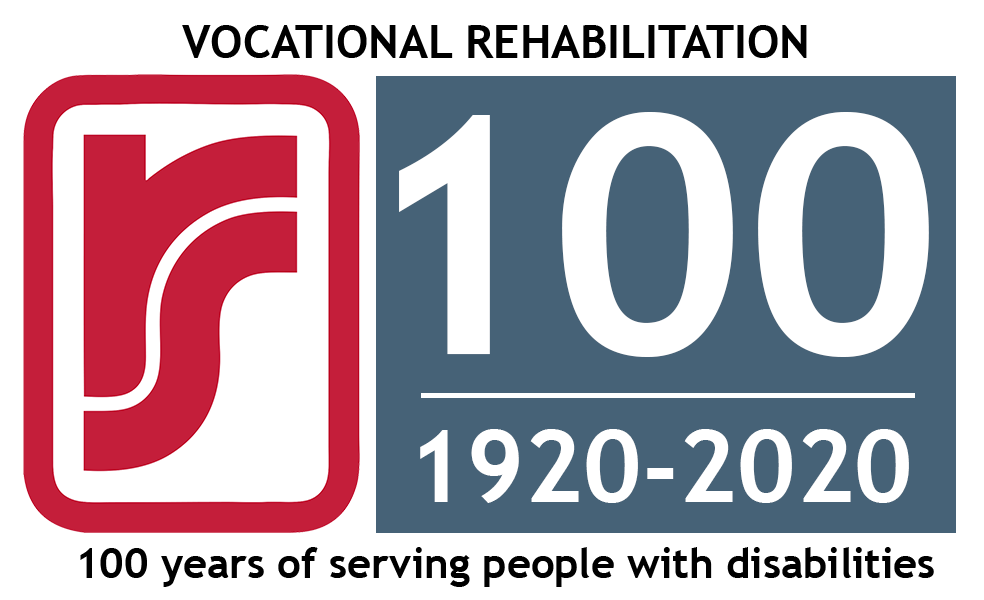 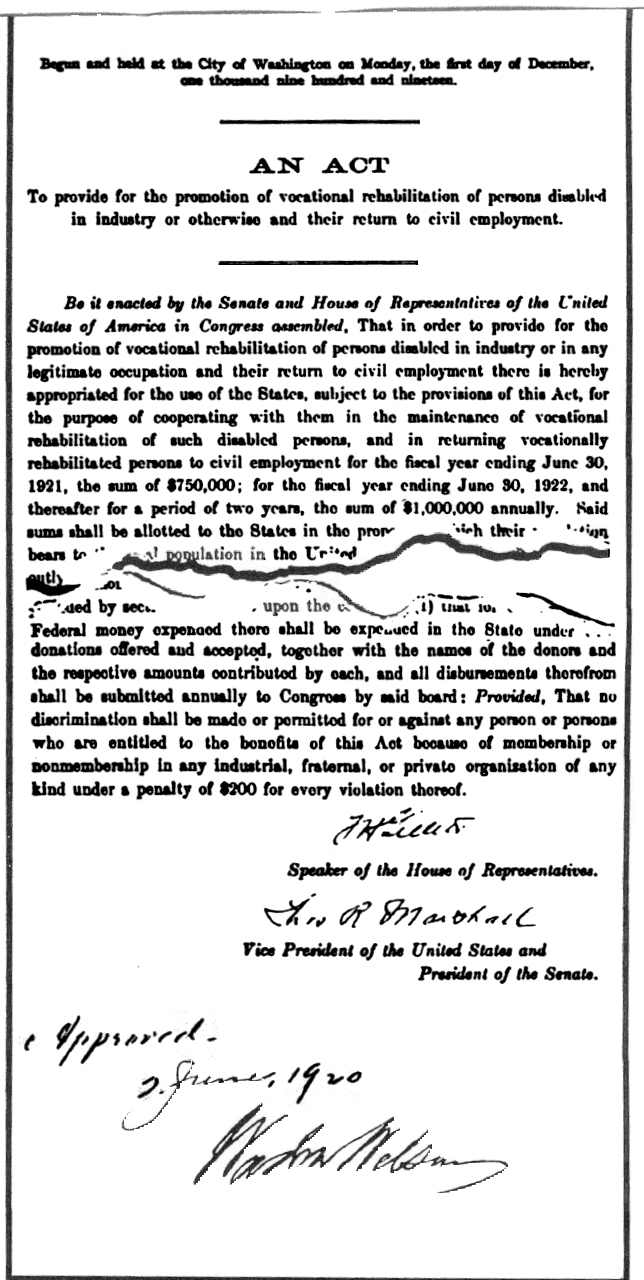 The Civilian Rehabilitation Act of 1920 advanced those models to ultimately create a vocational rehabilitation program for all Americans with disabilities, and this year we are celebrating the 100th anniversary of that action.

The Civilian Rehabilitation Act established the federal/state vocational rehabilitation program and gave funds to states, with a 50-50 match, mainly for vocational services, guidance, training, occupational adjustment, and placement services, but only those with physical disabilities were eligible individuals at the outset, and they were not provided with any physical or psychological therapeutic services.

The current Rehabilitation Act governing these services was originally passed in 1973 and that Act is now part of the Workforce Innovation and Opportunity Act, passed in 2014. Title V of the 1973 Act was particularly significant for advancing the civil rights of individuals with disabilities, including the non-discrimination provisions of Section 504. Today students with learning disabilities may receive educational services under Section 504 when they do not qualify for special education services under the Individuals with Disabilities Education Act. These services are critical to help students achieve success in school and transition into postsecondary education and/or employment.

The West Virginia Division of Rehabilitation Services (WVDRS) is answering the call to recruit WVDRS clients, who are interested in customer service representative jobs, to work with Amazon, the multinational company that provides online sales, web services, video and music streaming, Alexa through Echo devices, and so much more. Read the full story here 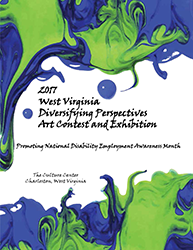 Charleston, W.Va. (Sept. 1, 2016) — The 2016 Diversifying Perspectives Art Contest and Exhibition will open with a reception at 2 p.m. Wednesday, Sept. 7, in the Great Hall of the Culture Center.

The exhibit will be on display in the Balcony Gallery and features original artwork created by people with disabilities. Read the news release

PathwaysWV.org is a collection of resources, tools and people to help students with disabilities through the journey from youth to adulthood. Your future begins now! It's never too early to start planning for your future and exploring pre-employment transition services.

See also our recommended resources for employers and for job seekers with disabilities.

Some content on this site is provided in an accessible PDF format. Use this link to download Adobe Reader to read that content, if needed. It's free.